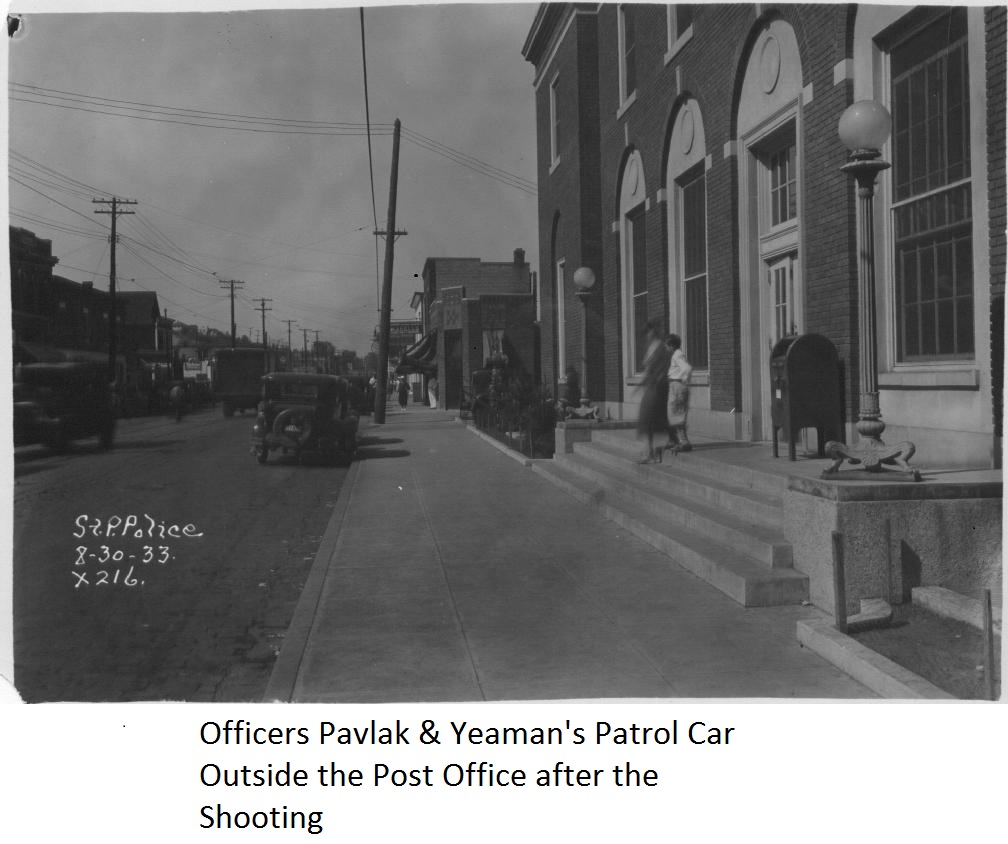 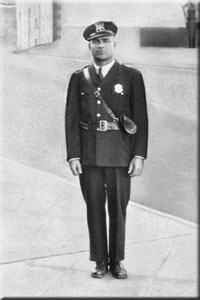 On August 30, 1933 at 9:10 a.m., Officer Pavlak and two 21-year-old messengers for Stockyards National Bank, Herbert Cheyene and Joseph Hamilton, went to the South St. Paul Railway Station to pick up a payroll. The payroll money had been shipped via train from the Federal Reserve Bank in Minneapolis. It was to be distributed to Swift and Company employees, as it was every Wednesday. The men went to the station located a block behind the post office, picked up the money, walked through the alley and returned to the post office. Once at the post office, they put the envelopes of money into bags and set off for Swift and Company. At 9:45 a.m. just as the messengers left the post office carrying the money, a big black sedan with a siren blaring and smoke coming from the back of the car drove up to the post office. People on the sidewalks could not see what was happening through the smoke or the two or three men who jumped out of the car. Two of the men approached the officer and the messengers - one holding an automatic and one a shotgun. After the one with the shotgun yelled "Stick 'em up," Pavlak threw up his hands without reaching for his gun. The two messengers were told to drop the bags, which they did. The messengers then hid under truck.

At this point Officer John Yeaman drove around the corner and a man in the street fired on him as he approached in his squad. The suspect then approached the officer's car and saw he was slumped over the wheel with a shot to the head. Pushing Yeaman down on the floor, the robber took Yeaman's gun and ran toward the post office, firing as he ran. Another witness reported that the shorter bandit had walked up to Yeaman's car as it backed toward the street and shot Yeaman twice. When Yeaman fell against the wheel, the robber opened the door and shot Yeaman again, took a machine gun from the car, and started firing. Then the man with the shotgun fired at Pavlak at close range, killing him instantly, almost decapitating him. The machine gunner fired at the post office, breaking glass partitions inside the post office, then fired in a circle hitting other buildings. 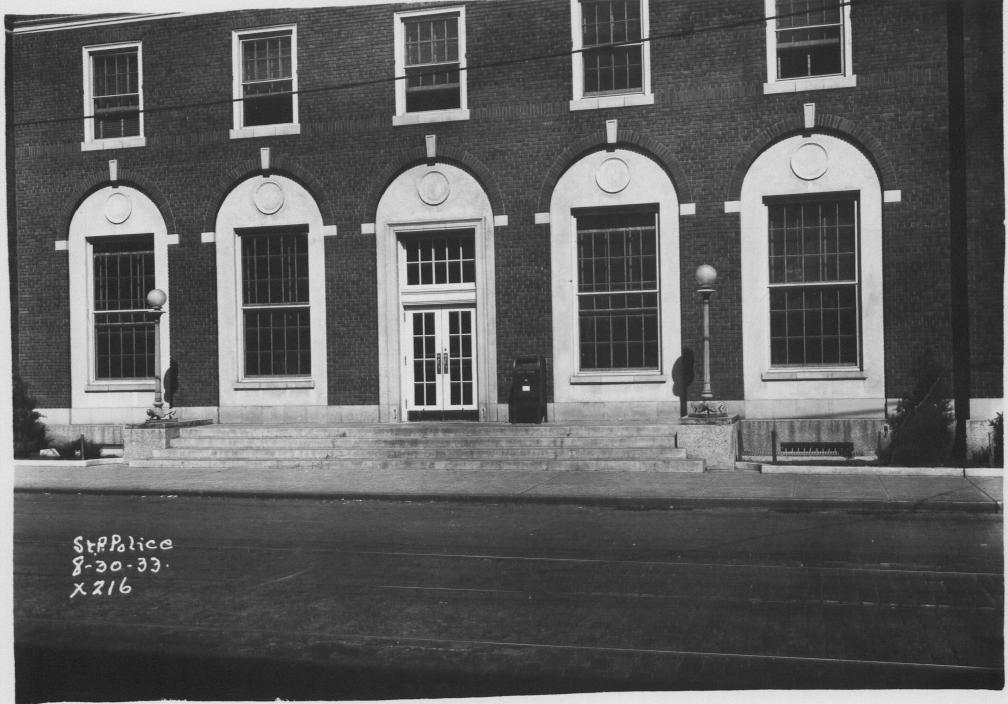 Witnesses saw one of the three bandits stagger during the shooting but an accomplice pushed him into the getaway car that drove north on Concord toward St. Paul. People, who had been in the area at the time of the shooting, hid in a vault at an automobile dealer.

It was later reported that the suspects were possibly seen in the area two hours prior to the shooting and had been in a beer parlor at 244 North Concord Street.

Officer John Yeaman, who had been shot in the face by machine gun bullets, recovered from his wounds. He had been an officer for Armour and Company for twelve years prior to becoming a police officer. 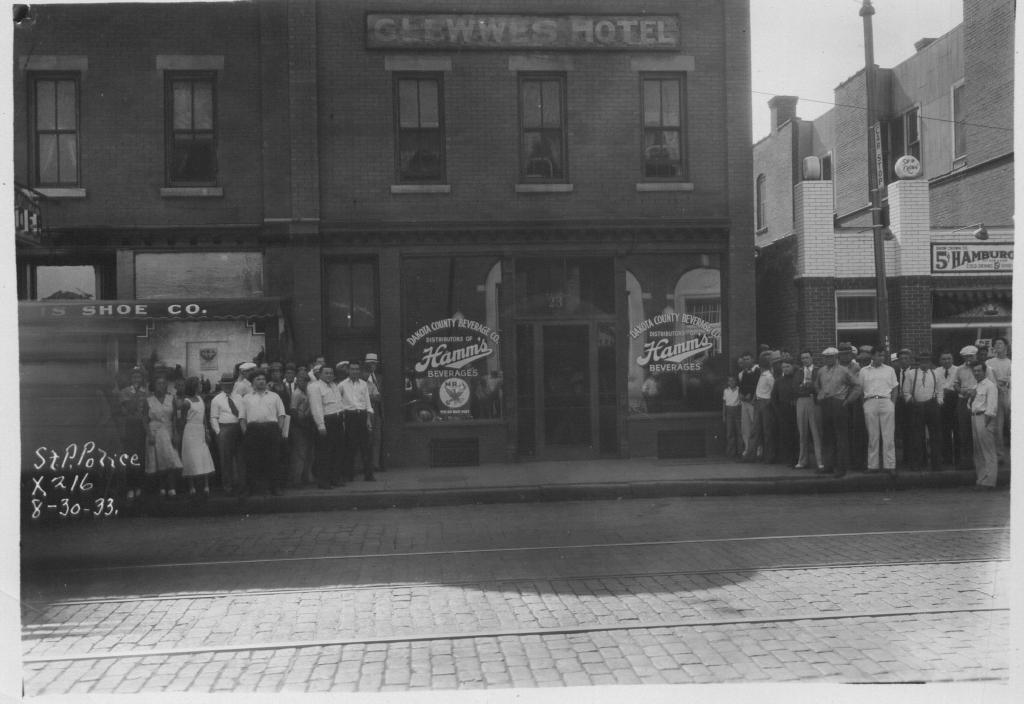 Officer Pavlak was 38 years old and had only been with the department since April. His wife, Pauline, and two children, Eleanor and Robert, survived him. His funeral was held September 1 at St. Augustine's Church and he was buried at Calvary Cemetery.

Story courtesy of: WE WILL REMEMBER, by Lisa Lovering. Published by .38 Special Press.

Report a Concern
Do you have a concern? 
Let us know about it.
Contact Us
Find out the ways to contact us
Notify Me
Sign up to receive email or text notifications
Winter Parking Notification
Get notified on parking
FAQs
Frequently Asked Questions
[]